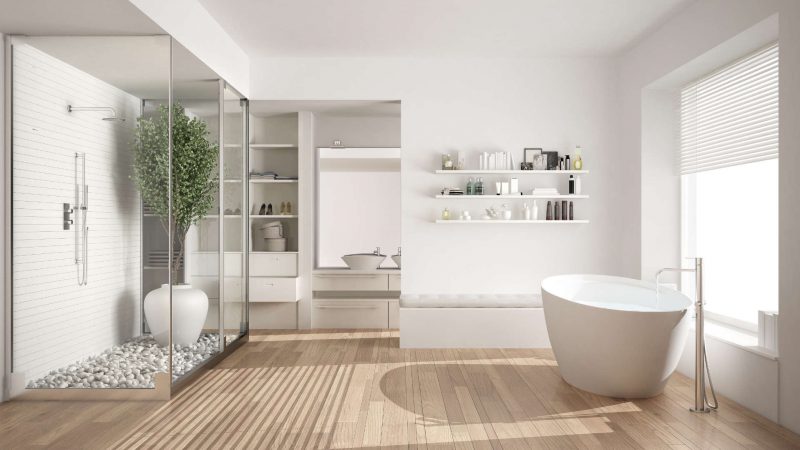 A shower designed using a shower tray is restrictive on space but this method is being replaced with a more modernized approach that adds a discrete linear drain in the floor along with an optional glass featuring shower glass doors. Here are some advantages to a shower enclosure that does not have a shower tray.

MORE SPACE – a bathroom shower without a shower tray can be made larger and is more comfortable to use. By eliminating a massive shower enclosure in favor of a unique design and possibly frameless shower doors in Chicago, much space is saved and the layout of the bathroom is improved.

YOU CHOOSE THE SHAPE OF YOUR SHOWER – a walk-in shower is possible anywhere in the bathroom, whether it’s in a small corner or niche. Without a shower tray, you can be creative with the design of your shower enclosure. A minimalist style of shower enclosure without the use of a shower tray does infringe on the overall design of the bathroom and it becomes a seamless part of the space for many who prefer to use glass shower doors in Chicago.

EASY WALL INSTALLATION – Glass panels that separate the shower stall from the rest of the space in the bathroom are easily fixed to the existing walls and floor using special techniques. This type of configuration makes it simple to add frameless shower doors Chicago bathrooms.

PRACTICAL – It is much easier to maintain a clean walk-in shower enclosure than it is an enclosure that features a white shower tray with bulky doors that include folds, bends, and rails. Frameless shower doors Chicago are much more practical.

But there are some disadvantages to building without a shower tray.
PRICE – While you may not have to spend some of the budget on purchasing a shower tray, the cost of building the shower enclosure can be higher. The added cost comes from the labor-intensive work involved in the installation of a walk-in stall.

REQUIRES A PROFESSIONAL – Creating a shower enclosure without the use of a shower tray takes the work of an experienced professional. An expert can assess the area, including the space allowable from the floor and the ceiling to provide the right installation. The work will also need top-quality materials, which the professional contractor can get at a reduced cost. With the shower drain located a few inches under the floor, if the proper care is not taken by a professional to ensure a waterproofed shower environment, the area beneath the shower can become flooded.

WATER FLOW INTO THE REST OF THE BATHROOM – In general, this is not an issue for most walk-in shower designs. The issue of splashing or leaking water to the outside of the shower area can be solved by installing glass shower doors Chicago homeowners have made popular. You may also build a shower wall or full enclosure that is secured to the floor.

Here is some useful documents

Glass Innovation has been serving Chicagoland area since 2003. As a company with bright vision and professional attitude, we take great pride in our service and craftsmanship.

Glass Innovation https://glassinnovationcorp.com
4.9 23 based on 23 ratings.